See below the venue and how to reach the venue.

The origins of the University of Salerno go back to the VIII century AD thanks to the foundation of the celebrated Salerno medical school, an authoritative and prestigious institution which remained important throughout the whole Medieval Age, teaching not only medicine, but also philosophy, theology and law. The teaching activities of the Salerno school went on for centuries, but were suppressed in 1865, after the re-organization of Universities of the newborn Kingdom of Italy.

The University was re-established in 1944 as a university institute of arts and education (Istituto universitario di Magistero). In 1968, this became part of the national system as “Facoltà di Magistero” of the University of Salerno. In a few years, this Faculty was joined by several other faculties, which formed the basis of an expanding university structure, including Literature and Philosophy, Economics and Commerce, Mathematics, Physics and Natural Sciences, Law, Engineering, Pharmacy, Politics, Foreign Language and Literature, and finally Medicine and Surgery, that was created in 2006.
It was the second university in Italy offering a course of study in Computer Science, opened in 1972; since then it has always been very active in this field and has promoted the applications of informatics in different scientific sectors.

Nowadays, the University of Salerno is considered by some official rankings 1the best university in Southern Italy. It hosts around 35,000 students and is structured in 17 Departments. In the academic year 2018-2019 it offered 35 Bachelor’s Degree courses, 36 Master’s Degree courses, 5 courses of 5-year length and 2 courses of 6-year length. There are also 15 Ph.D. Schools, 6 First Level Masters and 4 Second Level Masters.

Since 1988, the University of Salerno is sited in the Irno valley (Valle dell’Irno), a few kilometers away from Salerno and from Avellino. It is structured in two campuses: the main campus is sited in Fisciano, while the Baronissi campus hosts the Department of Medicine and Surgery. 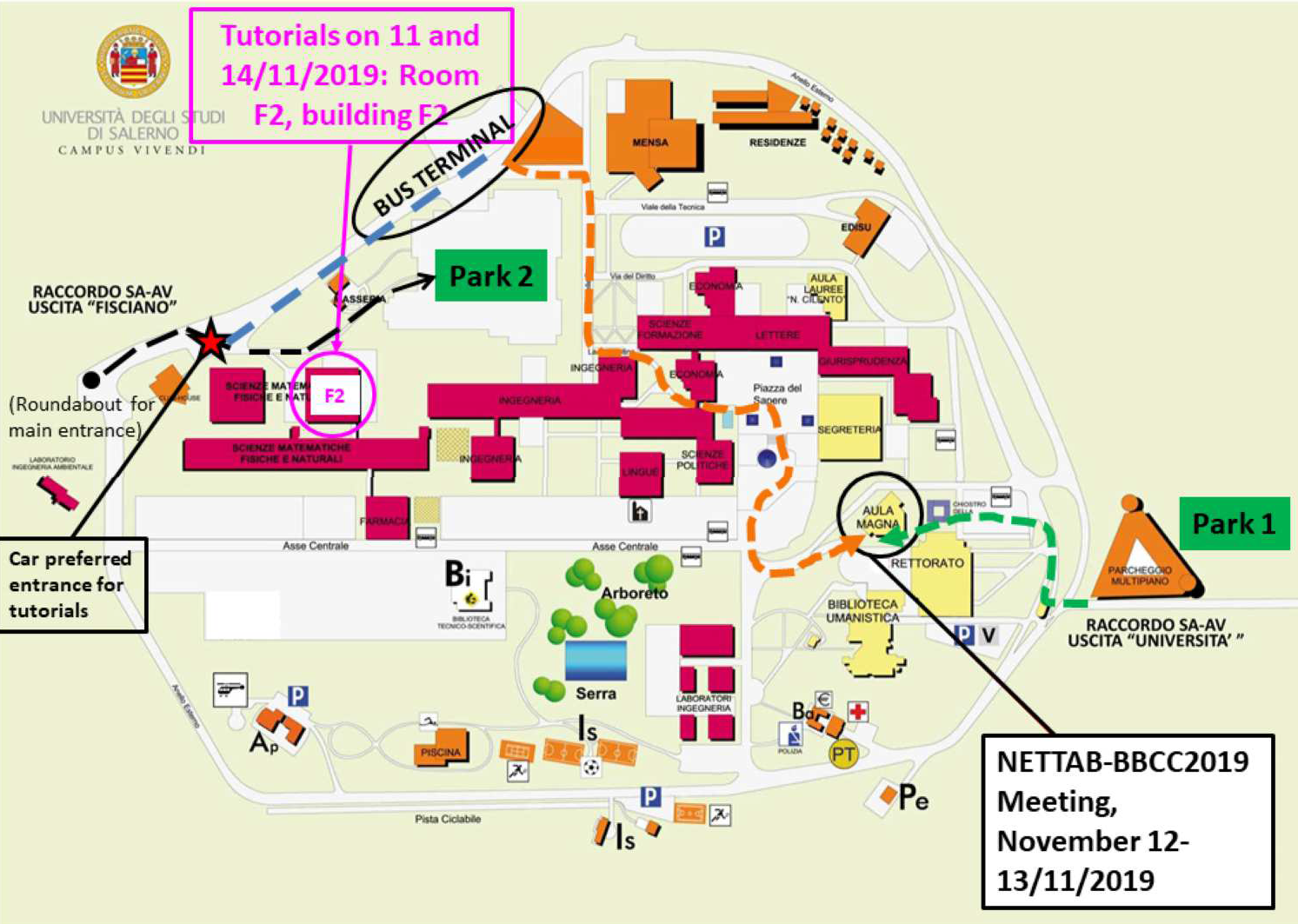 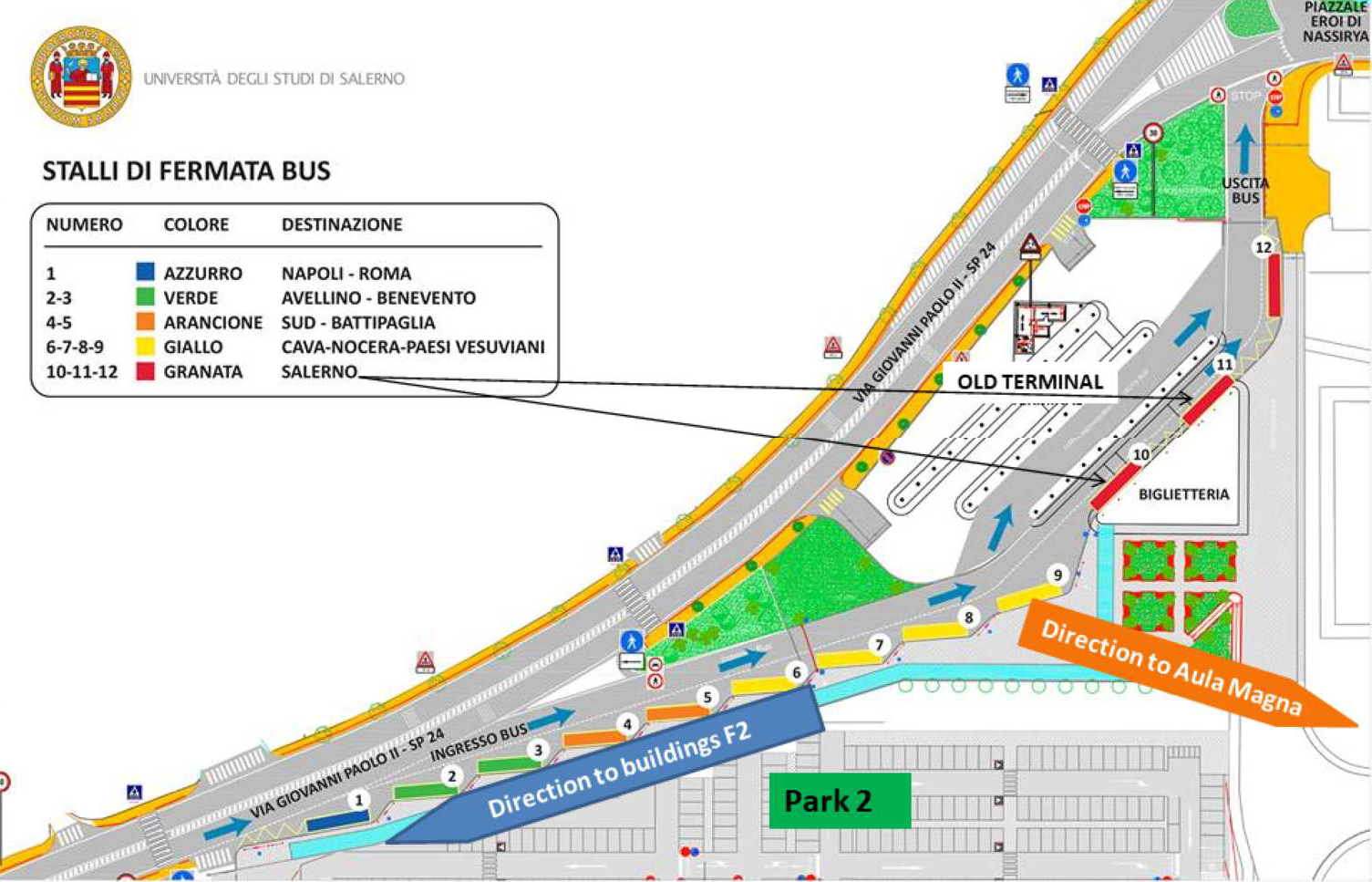 See the document with venue maps and directions for detailed information on how to reach the location of tutorials.

How to reach the venue

IMPORTANT NOTE: The campus of Fisciano is closed during weekends.
Fisciano is a very small village and during weekends there are only few public transport connections to Salerno, and no public connections to Naples Capodichino Airport.
We suggest to people planning to arrive on Sunday 10 November to book an hotel in Salerno. For suggested hotels please see the Hotels page.

From Salerno: check on the Web site of Busitalia.
From other towns: consult the MuSA Web site. You can also download the MuSA app for your smartphone: look for it on GooglePlay or iTunes.

Travel to Salerno (with Trenitalia or Italo) and continue to Fisciano by bus (see above).

The nearest airport served by the main airline companies is Capodichino Airport (Naples).
From the airport you may take a direct bus to Fisciano University and Salerno.
The direct connection Capodichino Airport – Fisciano – Salerno is managed by Buonoturist and by SITAsud.
From Salerno, continue onto Fisciano by bus (see above).
IMPORTANT NOTE! These connections are held only during weekdays.
As an alternative, and during weekends, take the bus Alibus to Naples central station ‘Napoli Centrale’ (see the timetable) and then travel to Salerno by train (see above).